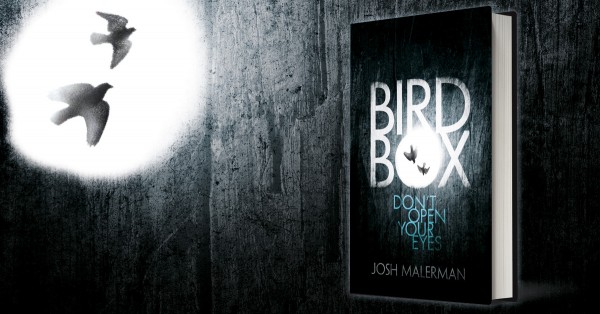 It’s finally here – Bird Box by Josh Malerman is out today! This terrifying, Hichcock-esque psychological horror is completely engrossing; definitely one to be read in one sitting. If you’ve not got your hands on a copy yet, then check out the chilling extract below for a taste of what to expect (but just to warn you: once you start, you WILL want to read it all!)

Malorie stands in the kitchen, thinking.

Her hands are damp. She is trembling. She taps her toe nervously on the cracked tile floor. It is early; the sun is probably only peeking above the horizon. She watches its meagre light turn the heavy window drapes a softer shade of black and thinks,

That was a fog.

The children sleep under chicken wire draped in black cloth down the hall. Maybe they heard her moments ago on her knees in the yard. Whatever noise she made must have travelled through the microphones, then the amplifiers that sat beside their beds.

She looks to her hands and detects the subtlest sheen in the candlelight. Yes, they are damp. The morning’s dew is still fresh upon them.

Now, in the kitchen, Malorie breathes deep before blowing the candle out. She looks around the small room, noting the rusted utensils and cracked dishes. The card­board box used as a garbage can. The chairs, some held together by twine. The walls are dirty. Dirt from the feet and hands of the children. But older stains, too. The bottom of the walls in the hall is discoloured, profound purples that have dulled to brown over time. These are blood. The carpet in the living room is discoloured, too, no matter how hard Malorie scrubs. There are no chemicals in the house to help clean it. Long ago, Malorie filled the buckets with water from the well and, using a suit coat, worked on removing the stains from all over the house. But they refused to go away. Even those that proved less persistent remained, a shadow perhaps of their original size, but still horribly visible. A box of candles hides a blotch in the foyer. The couch in the living room sits at an awkward angle, moved there to shield two blemishes that look like wolf heads to Malorie. On the second floor, by the attic stairs, a pile of musty coats conceals purple scratches, embedded deep into the foot of the wall. Ten feet away is the blackest stain in the house. She does not use the far end of the home’s second floor because she cannot bring herself to cross it.

This was once a nice house in a nice suburb of Detroit. Once, it was family-ready and safe. Only half a decade ago, a real-estate agent would have proudly showed it off. But this morning, the windows are covered with cardboard and wood. There is no running water. A big wooden bucket sits upon the kitchen counter. It smells stale. There are no conventional toys for the children. Pieces of a wooden chair have been whittled to play the part of little people. Small faces have been painted upon them. The cupboards are bare. There are no paintings on the walls. Wires run from under the back door into the first-floor bedrooms, where amplifiers alert Malorie and the children to any sounds coming from outside the house. The three of them live this way. They do not go outside for long periods of time. When they do, they are blindfolded.

The children have never seen the world outside their home. Not even through the windows. And Malorie hasn’t looked in over four years.

She does not have to make this decision today. It’s October in Michigan. It’s cold. A twenty-mile trip on the river will be hard on the children. They may still be too young. What if one of them were to fall into the water? What would Malorie, blindfolded, do then?

An accident, Malorie thinks. How horrible. After all this struggling, all this survival. To die because of an accident.

Malorie looks at the drapes. She begins to cry. She wants to yell at someone. She wants to plead with anyone who might listen. This is unfair, she would say. This is cruel.

She looks over her shoulder, to the kitchen entrance and the hall that leads to the children’s bedroom. Beyond the doorless frame, the children sleep soundly, covered by black cloth, hidden from light and sight. They do not stir. They show no sign of being awake. Yet, they could be listening to her. Sometimes, for all the pressure upon them to listen, for all the importance she’s placed upon their ears, Malorie believes they can hear her think.

She could wait for sunnier skies, warmth, more attention paid to the boat. She could inform the children, listen to what they have to say. Their suggestions could be good ones. Only four years old, but trained to listen. Able to help navigate a boat that will be piloted blindly. Malorie would not be able to make the trip without them. She needs their ears. Could she also use their advice? At four years old, would they have something to say about when was the best time to leave the house forever?

Slumping into a kitchen chair, Malorie fights back the tears. Her shoeless toe still taps on the faded linoleum. Slowly, she looks up to the top of the cellar stairs. There she once talked with a man named Tom about a man named Don. She looks to the sink, where Don once carried buckets of well water, trembling for having been outdoors. Leaning forward, she can see the foyer, where Cheryl used to prepare the food for the birds. And between herself and the front door is the living room, silent and dark, where there are too many memories of too many people to digest.

Four years, she thinks, and wants to smash her fist through the wall.

Malorie knows that four years can easily become eight. Eight will quickly become twelve. And then the children will be adults. Adults who have never seen the sky. Never looked out a window. What would twelve years of living like veal do to their minds? Is there a point, Malorie wonders, where the clouds in the sky become unreal, and the only place they’ll ever feel at home is behind the black cloth of their blindfolds?

Malorie swallows hard and imagines raising them by herself until they are teens.

Could she even do it? Could she protect them another ten years? Could she guard them long enough for them to guard her? And for what? What kind of life is she protecting them for?

You’re a bad mother, she thinks.

You are saving their lives for a life not worth living.

Malorie sees the drapes soften another degree through blurred, teary vision. If there is a fog out there, it won’t be for long. And if it can help her, if it hides her and the children as they go to the river, to the rowboat, then she has to wake them now.

She slams a hand against the kitchen table, then wipes her eyes dry.

Rising and leaving the kitchen, Malorie takes the hall and enters the children’s bedroom.

The bedroom is dark. The one window is covered with enough blankets so that even at its zenith, sunlight does not get through. There are two mattresses, one on each side of the room. Above them are black domes. Once, the chicken wire that supports the cloth was used to fence in a small garden by the well in the home’s backyard. But for the past four years, it has served as armour, protecting the children not from what could see them, but from what they could see. Beneath it, Malorie hears movement and she kneels to loosen the wire that’s fastened to nails in the room’s wood floor. She is already pulling from her pocket the blindfolds as the two children look at her with sleepy, surprised expressions.

‘Get up. Now. Mommy needs you to move fast.’

The children respond quickly. They do not whine or complain.

‘Where are we going?’ the Girl asks.

Malorie hands her a blindfold and says, ‘Put this on. We’re going on the river.’

The pair take their blindfolds and tie the black cloth tightly over their eyes. They are well versed in the motion. Experts, if at four years old they can be experts in anything. It breaks Malorie’s heart. They are only children and should be curious. They should be asking her why, today, they are going on the river – a river they have never been on before.

But, instead, they just do as they are told.

Malorie does not put on her own blindfold yet. She will get the kids ready first.

‘Bring your puzzle,’ she tells the Girl. ‘And, both of you, bring your blankets.’

The excitement she feels is unnameable. It’s much more like hysteria. Stepping from one room to another, Malorie checks for things, small items they might need. Suddenly, she feels horribly unprepared. She feels unsafe, as though the house and the earth beneath it just vanished, exposing her to the outside world entirely. Yet, in the mania of the moment, she holds tight to the concept of the blindfold. No matter what tools she might pack, no matter what household object might be used as a weapon, she knows that the blindfolds are their strongest protection.