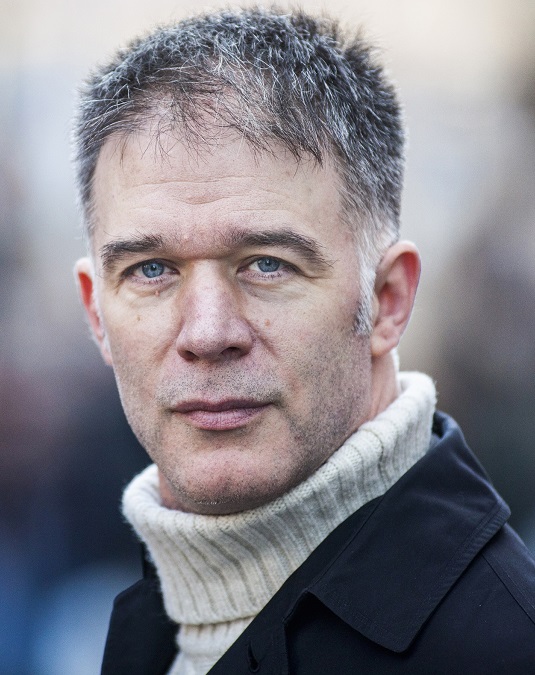 Tell us about yourself: I’m 48 and Scottish by birth, but increasingly Norwegian in outlook. I live in Oslo with my wife and our two sons, and Scandinavia is quietly seeping into my soul.

Tell us about your latest book: A Line of Blood is a twisty thriller about Alex and his eleven-year-old son Max. On one of those endless hot summer evenings that you get in London they find the next-door neighbour dead in the bath. It looks at first like a violent suicide, and Alex is appalled that he has not prevented Max from seeing the corpse. Then it turns out that Alex’s wife Millicent knew the man, and their marriage, and the life they have built together, begin to collapse.

Alex becomes an unwilling detective in his own life, increasingly suspicious of Millicent: what he discovers about her terrifies him. Yet all the while he and Millicent must try to guide Max, and support him as he comes to terms with what he has seen.

But what exactly has Max seen? What else does he know about his mother? And how can Alex be a good-enough father, when his own world is falling apart?

When did you start writing? I have always written; it’s only recently I’ve dared to start calling myself a writer, though. I began A Line of Blood five years ago, and the only person I told was my wife.

Where do you write? After I’ve dropped my son at school I go to the writers’ loft at the Oslo House of Literature (litteraturhuset.no). The loft is like a particularly aggressive library: people stare at you if you chew your food too loudly because everyone is there to work. I love the silence, and I like having a place to go to that’s outside the house. People ease up a little in the kitchen area, and talk about what they’re doing, so it provides colleagues, which is a luxury for a writer.

Which other authors do you admire? In crime, it has to be Patricia Cornwell. Kay Scarpetta is an extraordinary character: the way in which she takes takes cold, adulterated flesh and intuits the warm, living person is very moving.

Book you wished you’d written? Sentimental Education, by Gustave Flaubert. Or The Silence of the Lambs.

Greatest fictional criminal: Hannibal Lecter, without a doubt. I have a ‘no psychopaths’ rule for my own writing, because I think psychos can be an easy route for a writer: you don’t really have to explain them because they’re evil. Lecter, on the other hand, is mesmeric, and The Silence of the Lambs is a truly great book.

Greatest crime or criminal from the real world: Great criminals belong only to fiction. Now that I’ve said that, the crimes of Anders Behring Breivik haunt me. Four years ago he murdered 77 people, eight of them in a bomb attack in the Government district of Oslo, 69 of them in a shooting spree at a youth camp on the island of Utøya. The youngest of his victims was fourteen.

I covered the Breivik trial. Going home to my own family at the end of the day was hard. Worst were the days where we were listening to parents: Breivik sat staring at them as they calmly described to the court the effect of their child’s murder on their lives. I see no greatness in Breivik, but I did see greatness in the people who testified against him.

What scares you? Heights.

Are you ever disturbed by your own imagination? All the time. That’s a good thing for a writer, isn’t it?

Do you listen to music when you write? Yes. I use music to scare myself – it shows through in the writing. I remember playing the soundtrack to Psycho very loudly through the speakers in the living room. It’s such an eery score, and it even put the cats on edge. When it reached the shower-scene with its ‘slashing’ chords the cats became very uneasy, flattened their ears, looked at each other and at me, and slunk from the room. It’s the only piece of music I know that seems to cut through from our world into theirs.