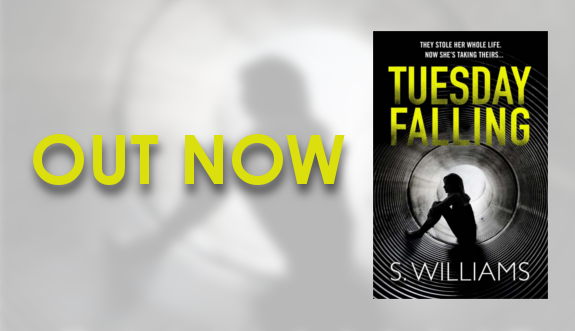 The beginnings of TUESDAY FALLING.

Happy Publication Day to Tuesday Falling! Author S. Williams takes us through the underground origins of his new book.

When I was six I got into trouble for smashing a hole in the back of my cupboard with my dad’s hammer, trying to find Narnia. It wasn’t a lot of trouble, me being only six, but me being only six meant it made a big impression! For years after that I tried, wholly unsuccessfully, to live in just one world. Then I moved to London

Going down into the underground is going into a different world. The air is different, hotter and drier, gusting round corners unexpectedly, or suddenly dying away. Noise behaves strangely. The busker’s accordion that can clearly be heard, but not seen. The sub-sonic rumble of trains in tunnels below or beside you; unseen but felt directly through the body. The sheer size of it. The feeling that one can go anywhere under London, just popping up in an entirely different part of the city.

And then there are the closed-off walkways, with their sliding metal gates. Where do they go? Why are they closed off? And when one looks out of a tube window, into the tunnel, the ghost image of someone not quite you staring back. Then suddenly the wall outside the window disappears, revealing an alcove, or a padlocked door, or another tunnel, with sparks fracturing the distant image like it’s hiding something.

What does it all mean?

When I first moved to London I worked under Oxford Street for one of the big department stores, warehousing their surplus stock in tunnels that wound away from store basements like snakes. The warehouseman seemed like he was made out of paper, all dry skin and uniform pallor. It was he who told me about all the tunnels under London All the old rivers and the Victorian sewers. The Royal mail mini-railway and the disused stations. The telephone exchange tunnels and the private bunkers. How, during the second world war, there were special stations for the government, and secret tunnels where the nation’s art was stored. The blitz and all that.

A few years later I was having a drink with a friend round the back of a well known West End theatre. There was a pop-up, for one night only, bar; almost certainly illegal. All it consisted of was a man dressed up in a dark suit, waiter’s apron and bowler hat, serving gin and tonic in plastic glasses, ice glittering in a stainless steel wheelbarrow by his side. It was a narrow alley with everyone sat on the (no doubt filthy) ground. From grates in the wall steam leaked out into the night –  presumably from the kitchens in the buildings that made up the alley wall – and the whole thing had a magical quality.

Or it could have been the gin.

Anyhow I was telling my friend about all the tunnels under London, and she told me about a group of people, urban explorers, who actively look for ways into this hidden world and document it. I was fascinated. I had no idea there was a whole movement out there. Apparently, she told me, there are loads of secret ways into this subterranean ‘other London’, from old doorways at the end of tatty alleys with nothing behind them except spiral steps leading down into the depths, to tunnels branching off the main, current system connecting to whole abandoned, yet still intact, stations.

After our drink I walked to Piccadilly underground to catch a tube home. On the platform I noticed a girl, about 17, slim, slightly indy, with stay-away clothes and never go to bed hair. She was sitting on the platform floor, her back against the wall, and it was as if there was no one else on the station.

Or once again, it could have been the gin.

Anyhow there was a gust of wind, a kind of pushing and pulling at the same time, and I looked in the tunnel and saw the single eye of the approaching train. When I looked back the girl had gone, nowhere to be seen. It was on the tube, staring at my ghost self in the window that I began forming the settings for Tuesday Falling.

For those of you who, like me, are fascinated by this strange world under our feet, I can highly recommend Beneath the City Streets, by Peter Laurie; London Under London, by Trench and Hillman, and most recently Subterranean London, by Bradley L Garrett. Or if you live in the future and are cyberlinked into the interweb, just look up the LCC and ether-jump from there!