We asked 15 different crime bloggers and reviewers to pick 5 crime books they would recommend to any reader.

A House of Knives by William Shaw

A Judgement in Stone by Ruth Rendell

A Scandal in Bohemia by Arthur Conan Doyle

A Song from Dead Lips by William Shaw

Black and Blue by Ian Rankin

Death on the Nile by Agatha Christie **

Every Dead Thing by John Connolly

Farewell my Lovely by Raymond Chandler

I Let You Go by Claire Mackintosh

One for the Money – Janet Evanovich

Shatter The Bones by Stuart Macbride

Someone Else’s Skin by Sarah Hilary

The Abomination by Jonathan Holt

The Accident by C.L. Taylor

The Bat by Jo Nesbo

The Big Sleep by Raymond Chandler **

The Black Echo by Michael Connolly

The Cuckoo’s Calling by Robert Galbraith**

The Coroner by M.R. Hall

The Daughter of Time by Josephine Tey

The Eyre Affair by Jasper Fforde

The Girl with the Dragon Tattoo by Stieg Larsson **

The Girl on the Train by Paula Hawkins **

The Hound of the Baskervilles by Sir Arthur Conan Doyle **

The Kind Worth Killing by Peter Swanson

The Last Witness by Denzil Meyrick

The Long Fall by Julia Crouch

The Maltese Falcon by Dashiell Hammett

The Murder Bag by Tony Parsons

The Murder of Roger Ackroyd by Agatha Christie

The Redeemer by Jo Nesbo

The Silence of the Lambs by Thomas Harris

The Suspicions of Mr Whicher by Kate Summerscale

The Three by Sarah Lotz

The Unquiet Grave by Steven Dunne

The White Trilogy by Ken Bruen

The Wicked Girls by Alex Marwood

Thirteen Steps Down by Ruth Rendell

An Unsuitable Job For A Woman by P D James

Want to Play by P.J Tracy

Anything by Agatha Christie but I love The Sitafford Mystery 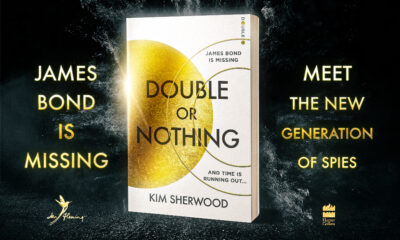 ⭐🎟️ WIN 2 TICKETS TO A BONDTASTIC EVENT IN LONDON 🎟️⭐