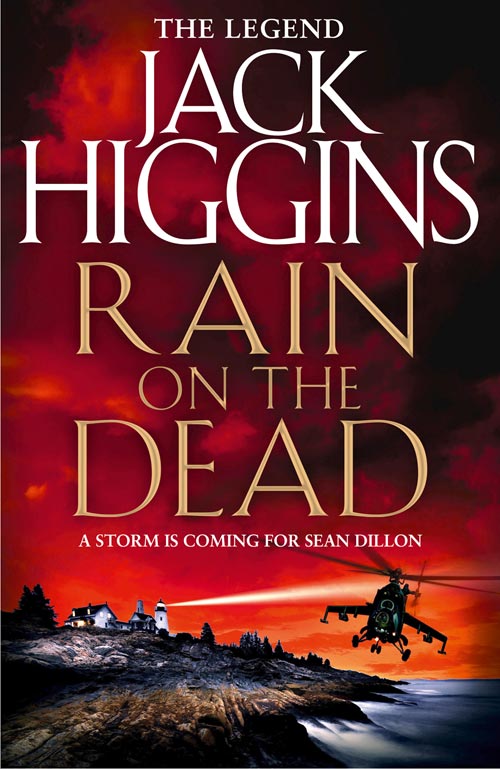 The legendary Jack Higgins is at it again with his latest installment of his bestselling Sean Dillon series. Whether you are a longtime fan or looking for a longstanding series to dive into, Rain on the Dead brings us a mesmerizing new thriller of murder, terrorism and revenge.

It begins with the attempted assassination of the ex-President of the United States.

Only the presence of Sean Dillon and the fellow members of the ‘Prime Minister’s Private Army’ prevents it becoming a bloodbath. Soon they are on the trail of the perpetrators, confident they will catch them.

What Dillon and his team don’t realize is that they have just sprung a trap that will lead them to almost certain death.

There is a new Master pulling the strings for al Qaeda in London, and this time he’s going to make sure the hated enemy is destroyed once and for all.

A storm is coming for Sean Dillon…

In addition to Rain on the Dead coming out in hardback in the UK, new paperbacks of Sean Dillon’s previous missions are now out today as well. The third, fourth, fifth, sixth and seventh books in the series have striking new covers–perhaps something to consider for those looking to get their Father’s Day shopping in early!

The second title out today is Catherine Hunt’s highly anticipated debut thriller Someone Out There. The Goodreads giveaway alone has seen over 850 entries. Someone Out There tells a story of obsession, revenge and deceit of a woman caught up in terrifying circumstances. If you loved The Girl on the Train and C.L. Taylor’s The Lie, this book will be right up your alley.

We’ve been fortunate enough to receive some fantastic guest blog posts from the author herself over the past couple of weeks. Be sure to catch our Q&A with Catherine Hunt as well as which two incidents sparked the idea for Someone Out There.

You can read the first chapter of the harrowing thriller here on the author’s website. If you’re ready for chapters two and three, read on below!