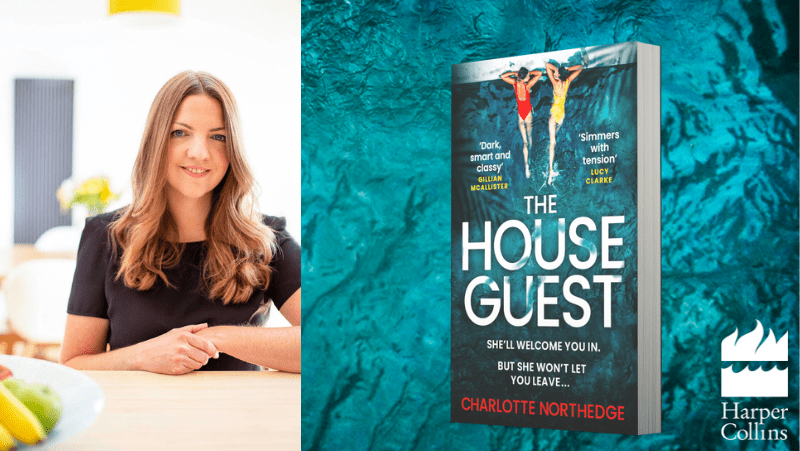 A young woman recently arrived in London. A missing sister. A charismatic life coach and her group of dedicated followers. A life-changing invitation …

The inspirations behind my debut thriller The House Guest came to me long before I sat down to write. I had moved to London after university and was working as a journalist on women’s magazines, I wanted to capture the loneliness and disorientation of moving to a new city, the desire to be part of a group. At the magazine, I was surrounded by women and was intrigued by the dynamics. I worked with a number of life coaches and saw up close how much sway they could have.

What if that influence was abused? How easily could a group of impressionable young women be manipulated? What if one, particularly vulnerable, was singled out – and given an opportunity she couldn’t refuse? I joined a writing group and started working on a novel about Kate, 25, who has moved to London to look for her missing sister, and Della, the older life coach who takes a special interest in her.

I’d been writing short stories since childhood and had started any number of novels, before putting them to one side a few chapters in. This time, the idea stuck – but once again, life got in the way. I got a new job, got married, had two children. All the while, in the back of my mind, Kate’s story developed and grew.

When I came back to the novel, during my second maternity leave, I saw it through fresh eyes. Now I was nearer Della’s age than Kate’s. Like her, I had two children. I became interested in themes of family and motherhood, in the ties that go back through generations. This time, I was determined to finish a draft. I loved the process of writing, but I wanted to see a finished product. To prove to myself I could do it. I signed up to the Curtis Brown Creative writing course, found my agent, Sophie Lambert, and wrote in the evenings and weekends, any time I could fit around family life.

Kate trusts Della, and Della trusts Kate.
Their downfall is each other.

When Kate moves to London after the disappearance of her sister, she’s in need of a friend. A chance meeting leads Kate to Della, a life coach who runs support groups for young women, dubbed by Kate as ‘the Janes.’

Della takes a special interest in Kate, and Kate soon finds herself entangled in Della’s life – her house, her family, and her husband. It’s only when she realises that she’s in too deep that Della’s veneer begins to crumble, and the warnings from ‘the Janes’ begin to come true.

Why is Della so keen to keep Kate by her side? What does Kate have that Della might want? And what really lies beneath the surface of their friendship?

When The House Guest was published by the brilliant team at HarperCollins last year, it was the culmination of more than a decade of work. Holding that hardback in my hands, all the hours I had spent typing downstairs while the children slept seemed more than worthwhile. Taking them to see it in the shops was one of the proudest moments of my life. They were nine and seven, and I had been writing that book for their entire lives. Just imagine the look on their faces when I told them I would be starting another one.

But working on my second novel has been an entirely different experience. Having gone part-time at work, I had the luxury of two writing days a week. Then the pandemic hit. After the initial anxiety and disorientation, I found I had more time to write in the evenings, too, with the usual rhythms of daily life interrupted. True, I was homeschooling two children each morning, but in the afternoons, while my husband took over, I would shut myself away and write for three to four hours every day. The words flowed out of me in a way they hadn’t done the first time around. I knew more about what I was doing, but also, I was able to enter the world of my novel in a different way.

My lockdown novel, The People Before, will be published in November. Perhaps I’ll never get the opportunity to write in such a concerted, uninterrupted way again. It certainly seemed a strange coincidence that the idea behind it, which came to me before the pandemic, centres around a house and the way its inhabitants feel when they are inside it. Locked inside my own four walls, I spent months imagining the lives of Jess and Pete and their two children, who move from London to a ramshackle new home in Suffolk, hoping to leave their troubles behind. But the dilapidated old Maple House only brings with it a new set of problems, and their lives begin to unravel from the moment they set foot inside.

City versus country living, the way that homes make us feel, adapting to change and being confronted unexpectedly by the past… These are just some of the themes of The People Before that came to feel very timely as I was writing and will hopefully strike a chord with readers later this year. In the meantime, I’ll be taking my children to see the newly released paperback of The House Guest in bookshops, with its beautiful cover and endorsements from novelists I have admired for years. It’s moments like these that are the culmination of all the hard work of bringing a book into the world – whether it takes two years, or ten.

The House Guest is out in paperback on 17th March. The People Before will be published in November 2022.