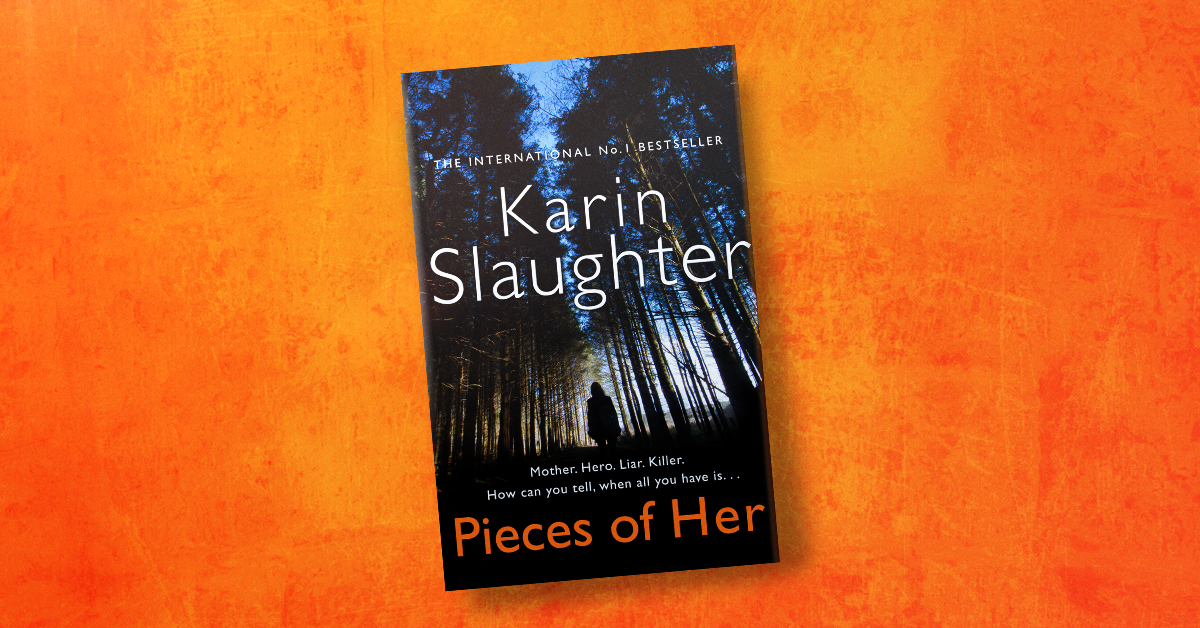 To celebrate publication of the brand new standalone thriller from Karin Slaughter next week, check out this sneak peak thrilling extract from Pieces of Her… 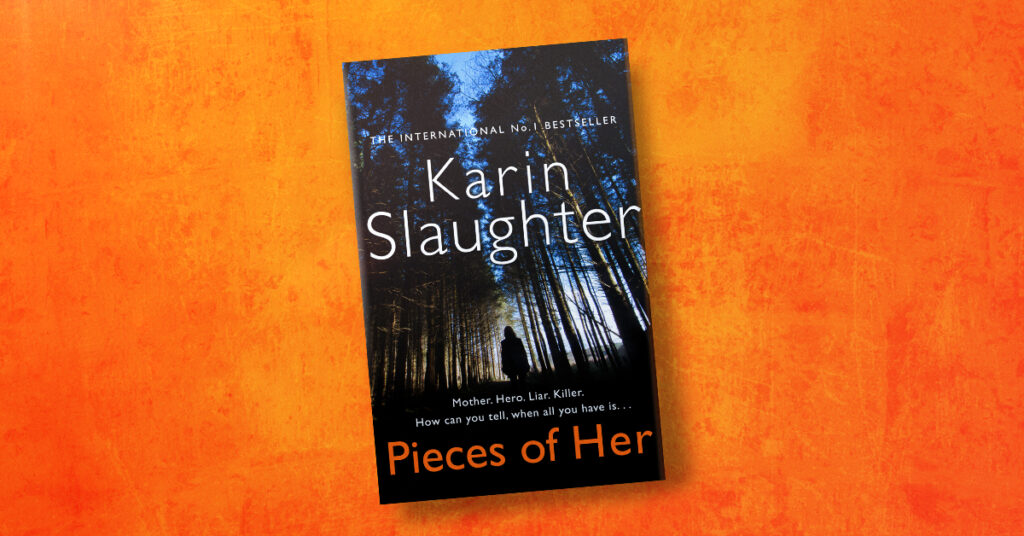 “Jesus,” somebody whispered, low and mean, but with a tinge of surprise, all at the same time.
The air had changed. That was the only way to describe it. The fine hairs on the back of Andy’s neck stood up. A chill went down her spine. Her nostrils flared. Her mouth went dry. Her eyes watered.
There was a sound like a jar popping open.
Andy turned.
The handle of the coffee cup slipped from her fingers. Her eyes followed its path to the floor. White ceramic shards bounced off the white tiles.
There had been an eerie silence before, but now there was chaos. Screaming. Crying. People running, ducked down, hands covering their heads.
Bullets.
Pop-pop.
Shelly Barnard was lying on the floor. On her back. Arms splayed. Legs twisted. Eyes wide open. Her red T-shirt looked wet, stuck to her chest. Blood dribbled from her nose. Andy watched the thin red line slide down her cheek and into her ear.
She was wearing tiny Bulldog earrings.
“No!” Betsy Barnard wailed. “N—”
Pop.
Andy saw the back of the woman’s throat vomit out in a spray of blood.
Pop.
The side of Betsy’s skull snapped open like a plastic bag.
She fell sideways onto the floor. On top of her daughter. Onto her dead daughter.
Dead.
“Mom,” Andy whispered, but Laura was already there. She was running toward Andy with her arms out, knees bent low. Her mouth was open. Her eyes were wide with fear. Red dots peppered her face like freckles.
The back of Andy’s head slammed into the window as she was tackled to the ground. She felt the rush of air from her mother’s mouth as the wind was knocked out of her. Andy’s vision blurred. She could hear a cracking sound. She looked up. The glass above her had started to spiderweb.
“Please!” Laura screamed. She had rolled over, was on her knees, then her feet. “Please, stop.”
Andy blinked. She rubbed her fists into her eyes. Grit cut into her eyelids. Dirt? Glass? Blood?
“Please!” Laura shouted.
Andy blinked again.
Then again.
A man was pointing a gun at her mother’s chest. Not a cop’s gun, but the kind with a cylinder like in the Old West. He was dressed the part—black jeans, black shirt with pearl buttons, black leather vest and black cowboy hat. Gunbelt hanging low on his hips. One holster for the gun, a long leather sheath for a hunting knife.
Handsome.
His face was young, unlined. He was Shelly’s age, maybe a little older.
But Shelly was dead now. She would not be going to UGA. She would never be mortified by her mother again because her mother was dead, too.
And now the man who had murdered them both was pointing a gun at her mother’s chest.
Andy sat up.
Laura only had one breast, the left one, over her heart. The surgeon had taken the right one and she hadn’t gotten reconstructive surgery yet because she couldn’t stand the thought of going to yet another doctor, having another procedure, and now this murderer standing in front of her was going to put a bullet in it.

“Mm—” The word got caught in Andy’s throat. She could only think it—
Mom.
“It’s all right.” Laura’s voice was calm, controlled. She had her hands out in front of her like they could catch the bullets. She told the man, “You can leave now.”
“Fuck you.” His eyes darted to Andy. “Where’s your gun, you fucking pig?”
Andy’s whole body cringed. She felt herself tightening into a ball.
“She doesn’t have a gun,” Laura said, her voice still composed. “She’s a secretary at the police station. She’s not a cop.”
“Get up!” he screamed at Andy. “I see your badge! Get up, pig! Do your job!”
Laura said, “It’s not a badge. It’s an emblem. Just stay calm.” She patted her hands down the same way she used to tuck Andy into bed at night. “Andy, listen to me.”
“Listen to me, you fucking bitches!” Saliva flew from the man’s mouth. He shook the gun in the air. “Stand up, pig. You’re next.”
“No.” Laura blocked his way. “I’m next.”
His eyes turreted back to Laura.
“Shoot me.” Laura spoke with unmistakable certainty. “I want you to shoot me.”
Confusion broke the mask of anger that was his face. He hadn’t planned for this. People were supposed to be terrified, not volunteer.
“Shoot me,” she repeated.

He peered over Laura’s shoulder at Andy, then looked back.
“Do it,” Laura said. “You only have one bullet left. You know that. There are only six bullets in the gun.” She held up her hands showing four fingers on her left hand, one on her right. “It’s why you haven’t pulled the trigger yet. There’s only one bullet left.”
“You don’t know—”
“Only one more.” She waved her thumb, indicating the sixth bullet. “When you shoot me, my daughter will run out of here. Right, Andy?”
What?
“Andy,” her mother said. “I need you to run, darling.”
What?

“He can’t reload fast enough to hurt you.”
“Fuck!” the man screamed, trying to get his rage back. “Be still! Both of you.”
“Andy.” Laura took a step toward the gunman. She was limping. A tear in her linen pants was weeping blood. Something white stuck out like bone. “Listen to me, sweetheart.”
“I said don’t move!”
“Go through the kitchen door.” Laura’s voice remained steady. “There’s an exit in the back.”
What?
“Stop there, bitch. Both of you.”
“You need to trust me,” Laura said. “He can’t reload in time.”
Mom.
“Get up.” Laura took another step forward. “I said, get up.”
Mom, no.
“Andrea Eloise.” She was using her Mother voice, not her Mom voice. “Get up. Now.”
Andy’s body worked of its own volition. Left foot flat, right heel up, fingers touching the ground, a runner at the block.
“Stop it!” The man jerked the gun toward Andy, but Laura moved with it. He jerked it back and she followed the path, blocking Andy with her body. Shielding her from the last bullet in the gun.
“Shoot me,” Laura told the man. “Go ahead.”
“Fuck this.”

Andy heard a snap.
The trigger pulling back? The hammer hitting the bullet?
Her eyes had squeezed closed, hands flew to cover her head.
But there was nothing.
No bullet fired. No cry of pain.
No sound of her mother falling dead to the ground.
Floor. Ground. Six feet under.
Andy cringed as she looked back up.
The man had unsnapped the sheath on the hunting knife.
He was slowly drawing it out.
Six inches of steel. Serrated on one side. Sharp on the other.

He holstered the gun, tossed the knife into his dominant hand. He didn’t have the blade pointing up the way you’d hold a steak knife but down, the way you’d stab somebody.
Laura asked, “What are you going to do with that?”
He didn’t answer. He showed her.
Two steps forward.
The knife arced up, then slashed down toward her mother’s heart.
Andy was paralyzed, too terrified to ball herself up, too shocked to do anything but watch her mother die.
Laura stuck out her hand as if she could block the knife. The blade sliced straight into the center of her palm. Instead of collapsing, or screaming, Laura’s fingers wrapped around the hilt of the knife.
There was no struggle. The murderer was too surprised.
Laura wrenched the knife away from his grip even as the long blade was still sticking out of her hand.
He stumbled back.
He looked at the knife jutting out of her hand.

One second.
Two seconds.
Three.
He seemed to remember the gun on his hip. His right hand reached down. His fingers wrapped around the handle. The silver flashed on the muzzle. His left hand swung around to cup the weapon as he prepared to fire the last bullet into her mother’s heart.
Silently, Laura swung her arm, backhanding the blade into the side of his neck.
Crunch, like a butcher cutting a side of beef.
The sound had an echo that bounced off the corners of the room.
The man gasped. His mouth fished open. His eyes widened.
The back of Laura’s hand was still pinned to his neck, caught between the handle and the blade.
Andy saw her fingers move.

There was a clicking sound. The gun shaking as he tried to raise it.
Laura spoke, more growl than words.
He kept lifting the gun. Tried to aim.
Laura raked the blade out through the front of his throat.
Blood, sinew, cartilage.
No spray or mist like before. Everything gushed out of his open neck like a dam breaking open.
His black shirt turned blacker. The pearl buttons showed different shades of pink.
The gun dropped first.
Then his knees hit the floor. Then his chest. Then his head.
Andy watched his eyes as he fell.
He was dead before he hit the ground.