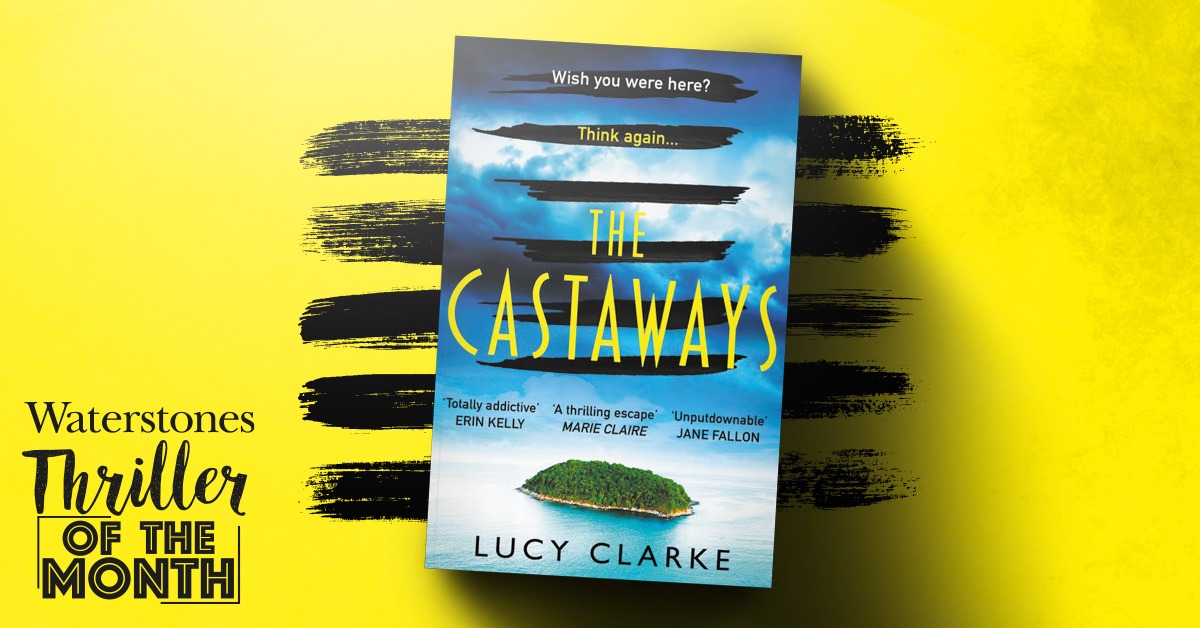 We’re delighted to share the news that The Castaways by Lucy Clarke has been selected as Waterstones’ Thriller of the Month for August.

Brimming with spine-chilling suspense and high drama, The Castaways places a wrecked plane and handful of survivors on a faraway island that is about to bring closely-guarded secrets to the surface. Gripping, twisty and full of sun-soaked atmosphere, Lucy Clarke’s The Castaways is the perfect book to escape with this summer. Read on for an extract . . .

Lori wheeled her suitcase along the humid airport walkway. Loose strands of hair were pasted to the back of her neck. Seeing her gate number ahead, she paused, then glanced back over her shoulder.

She slipped her mobile from her pocket, the screen eyeing her blankly. No messages. No missed calls. Her heart kicked hard between her ribs: it was only minutes until they were due to board.

A snatch of their argument arrowed into her thoughts. I don’t recognise you any more . . .

Lori worked her teeth over the insides of her cheek, finding the smooth flesh, pressing down until she tasted blood.

She tried to picture herself leaving without Erin – taking this inter-island flight to the remote southeastern reaches of the Fijian archipelago. She reminded herself that she’d already done the hardest leg of the journey yesterday – the long-haul flight from London to Fiji. No diazepam needed. But she’d had Erin beside her then, who’d come armed with snacks, music, books, and was so busy colluding about what drinks they’d order once airborne, that Lori had barely noticed the take-off. On arrival last night, they’d checked into a beach-side hotel, planning to grab dinner and some sleep before this morning’s short flight to their resort.

Only now here she was, without Erin.

She dragged her suitcase into the toilets. Leaning over the sinks, she eyed herself in the mirror. Her fingertips explored her puffy eyelids, circling to the deep shadows beneath them. She’d waited up last night, half hoping to hear shambling footsteps along the hotel corridor, a knock at the door, her sister’s voice, whisper-shouting to let her in. She’d imagined Erin, gin-drunk, a slur of apologies tumbling out. Maybe she would’ve let her in, shuffled over in the wide hotel bed to make space. Told Erin to breathe the other way and warned her not to snore. Maybe she would’ve done that. Or maybe she would only have opened the door a crack, just enough to tell her to leave.

But Lori didn’t know how she’d have felt, because Erin hadn’t returned.

She took out her make-up bag to give her hands some-thing to do. Her skin had a winter pallor that spoke of too many hours indoors. It had been months since she’d felt the kiss of sunshine. God, blue skies. Swimming in a warm sea. Fresh air. A good book. She deserved this holiday. Needed it.

But what if the whole thing was a mistake? She’d booked it on a moment’s impulse. Three in the morning. Her sheets twisted from another wakeful night. She’d taken out her laptop to watch a film – something to lock her thoughts to – and then the advert had popped up. Ten nights on a remote, bare-foot island in Fiji, the dates spanning her twenty-eighth birthday. She’d opened a new tab and checked the joint bank account and seen there was still two thousand pounds left. Fuck you, Pete, she’d thought as she’d pressed Confirm booking.

At first light, she’d crept into Erin’s bedroom, proffering a mug of steaming tea as she’d slipped her legs beneath the duvet.

‘I’ve got news,’ Lori announced. ‘Light coming on.’ She’d reached across and flicked on the bedside lamp. ‘I’ve booked us a trip. To Fiji. The second week in January. You said you had annual leave to use up. It’s my treat.’ Erin had lifted her head a fraction, opening one eye. Lori could guess what her sister would be thinking – But Lori’s terrified of flying. She never travels. A holiday is just a plaster across a much deeper wound – so without giving her the chance to speak, Lori continued, her voice low, certain, ‘I need to get away. And the only person I want to do that with is you.’ Then a loaded pause. ‘Together.’

Together. The history and weight of that word pulsed between them.

There was a beat of a pause, no more than a breath of hesitation. ‘Okay, then.’

Yet now it was just Lori waiting in an airport. Alone.

She zipped up her make-up bag, grabbed her case and left the toilets.

The walkway was still deserted. She reached again for her mobile, turning it through her hands, deciding. It should be Erin who made the call . . . and yet, she just needed to hear her voice, check she was okay.

Listening to it ring, she watched as a pilot in a crisp white uniform advanced along the walkway. He wore a navy peaked cap, beneath which his eyes were heavily pouched and blood-shot. The pilot of my plane? He crouched down, searching for something within his carry-on case, his expression clouded with confusion. He dragged a hand down over his face, pulling the loose skin towards his jowls. After a few moments, he gave up on whatever he was looking for. He took a deep breath, then moved on, eyes lowered.

The sudden click of voicemail snapped her gaze away. ‘It’s Erin. Keep it short,’ then the tone so quickly afterwards it was like you’d been tripped up.

Lori hesitated, a pregnant pause stretching out, her silence recorded.

Her thoughts swam back two decades. Lying beneath a star-flecked duvet, breath warm in the cotton-dark, their mother only dead a week. Lori had squeezed her sister’s hand, whispering, You don’t need to be scared, Erin. I’m your big sister. I’ll look after you now.

But what about when Lori needed her? Like right now. What then?

‘I’m at the airport,’ Lori hissed, lips close to the phone. ‘Where the hell are you?’