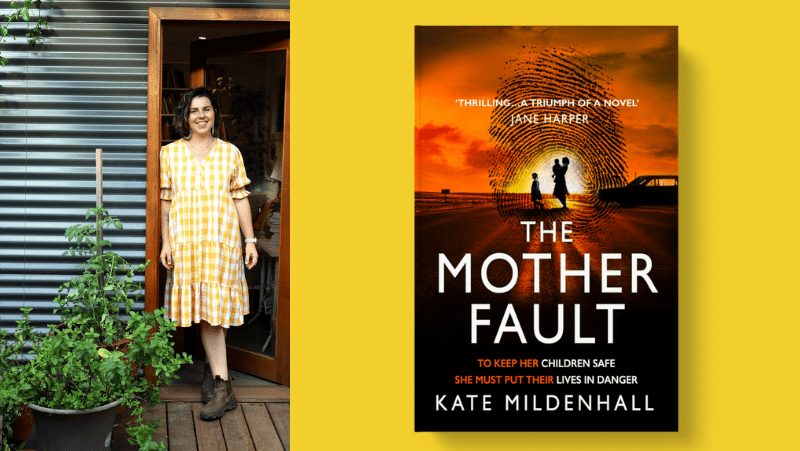 I am spreadeagled against the wall of my small cabin in the dark. The boat creaks and moans, the sails up on deck whistle in the wind. We pitch again, the other direction now, and I am thrown back on the bed. My bunkmate’s bag flies from the spot it was nestled in and I scramble to collect her things. Shouts and bangs from above, seawater sprays through the small window and I fumble to close it.

This, I tell myself, is the craziest thing you have ever done.

It is 2017 and I am one of five crew members aboard a yacht travelling from Darwin, Australia to Ambon, Indonesia. I have never been on a yacht before and until the day before we set sail, had not met any of my crewmates or captain. I have left my husband and two small children back home in Melbourne. I am doing this all in the name of research for my novel, and suddenly I am regretting it.

What if we tip over?

How do you swim out from underneath an overturned yacht?

What will they say at your funeral when they know you drowned at sea all for a stupid book?

Six months prior, in the middle of writing my novel THE MOTHER FAULT – I found myself desperate to better understand my protagonist, Mim, a mother who boards a yacht with her two small children to escape a dangerous situation and find her missing husband. On a whim, I sent a late-night email volunteering to crew in a yacht race. I’d never been on a yacht in the open ocean and I wanted to know what it felt like to be completely untethered from land, what the sky looked like out there, what I might smell and taste and how my body might remember the experience.

I don’t necessarily believe a writer has to live an experience to write about it, but I find the ‘doing’ of research one of the most thrilling and inspiring parts of novel writing. I knew that my book would be infinitely better if I could fold my own sailing experience into the character of Mim.

The night of the ‘storm’ (when I reached deck for my midnight shift, I was told it was merely a light wind), I did really think I was going to die. Reaching the edge of that fear taught me something about myself, and also about the character I was trying to understand and what she would be prepared to do to protect her kids.

I don’t regret experiencing that fear, and I wish I could relive all the moments of joy. I watched flying fish criss-cross over the deck, peachy gold sunsets that lit up the sea, a ghostly gas rig glowing like a strange monster rising out of a midnight sea. I heard stories of smugglers on prawn trawlers, islands with shipwrecked treasures, how to get rid of a body in Darwin (by croc in the mangroves, obviously). I suspect most of these tales were told with a little added salt and pepper, but I loved every second of them – recounted on a dark deck as we kept watch, hands clasped around coffee mugs, the quiet slosh of the sea in our ears. I walked the crooked streets of Ambon, winding up the mountain away from the bay, and thrilled at the fact I was alone. Turning corners at random, stopping to drink sweet coffee or jumping on a cyclo or taking selfies with a local kid – I felt like a 20-something backpacker, not a suburban mum, and closer than ever to my character.

When I returned to the book after my week at sea and on the island of Ambon, my senses were buzzing, my phone filled with thousands of images, my journal scribbled with notes. I poured it all into the novel. I called my new sailing mates, asked them to check over details, felt gratified and intensely proud when they said I’d got things right.

I wanted to know, and I did. I knew how Mim felt in the middle of the ocean. I’d seen the night sky in the middle of the sea, moonbright against water glittering with phosphorescence. I’d breathed in the smells of diesel and bilgewater and held the taste of salt, instant coffee and two minute noodles (to keep seasickness at bay) on my tongue. My body remembered the strange bruises from knocking into walls in the swell, rope burn on my palms, the knee wobble of dry land. It remembered that night on a wild-ish sea, splayed against the cabin wall, talking to myself.

Readers sometimes get in touch to tell me they were terrified during the sailing scenes in The Mother Fault, or that they don’t know how I made Mim’s experience at sea so vivid.

I lived it, I tell them and am thankful every single time I send that email, that I took a chance.

Was it the craziest thing I’ve ever done?

Would I do it again?

THE MOTHER FAULT is out now

In a futuristic world, danger awaits… if you loved THE LAST and THE HANDMAID’S TALE you will love this!

To keep her children safe, she must put their lives at risk …

In suburban Australia, Mim and her two children live as quietly as they can. Around them, a near-future world is descending into chaos: government officials have taken absolute control, but not everybody wants to obey the rules.

When Mim’s husband Ben mysteriously disappears, Mim realises that she and her children are in great danger. Together, they must set off on the journey of a lifetime to find Ben. The government are trying to track them down, but Mim will do anything to keep her family safe – even if it means risking all their lives.

Can the world ever return to normality, and their family to what it was?