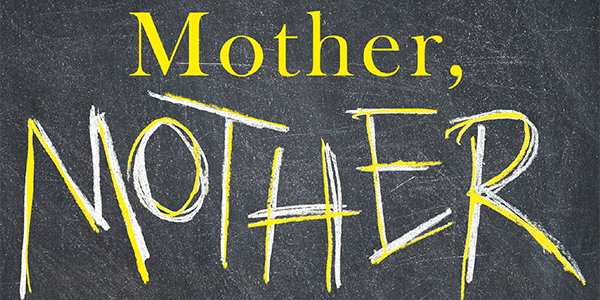 It’s Mother’s Day! A day dedicated to celebrating, thanking, and spoiling all the wonderful mums out there. But what if your relationship with your mum is problematic? In our latest blog post, novelist Koren Zailckas talks about her awful relationship with her own mum, which fed into her chilling novel Mother, Mother, and defines the characteristics of a bad mum…

But that kind of deductive reasoning is like defining “love” as the absence of hate.  Somehow it fails to really get at the heart of what’s wrong with someone like Mother Mother’s Josephine Hurst – a woman who makes Mrs Bates look like June Cleaver.

Back when I was still in touch with my mother, I used to fight tears of frustration in the greeting card aisle every Mother’s Day.  I was always struck by the endless variations on good mothering.  There was the metaphysical mum, explaining life’s mysteries. There was the domestic goddess with her tray of lovingly frosted treats.  There was career mother/provider who valued confidence and helped her kids hone in on their goals.  There was the mum-as-best-friend.  The mum-as-therapist who was there for life’s ups and downs.   And, finally, the saintly maternal type who’d dealt with a lot of crap (yes, even literally, in the early years).

In fact, that greeting card aisle was where it first dawned on me: every good mother is good in her own distinct way, but most personality disordered mothers are predictably alike.

And so, in the interest of equality I’d like to present a Mother’s Day list entirely devoid of cartoon daisies or cuddly cursive.  If it were a greeting card, it would likely be printed with a picture of Casey Anthony, Dina Lohan or, better yet, Joan Crawford.  Here’s my checklist of the qualities that make a bad mum (or at least an unequipped, personality disordered one):

She shape shifts.  A bad mother is unpredictable and arbitrary.  The official term is “gaslighting.”  In public, she plays affectionate.  In private, physical contact is limited to physical punishments or the rough, perfunctory brushings of hair and baby teeth.  Some days, she’s ignoring, even neglectful.  Others, she’s with you every second, appraising you the same way she scrutinizes produce at the farmer’s market.  Forget to compliment her one day, and she’ll call you self-absorbed.  Compliment her next time, and she’ll accuse you of using flattery to suit your own manipulative goals.  The mixed messages are disorienting, and she means them to be.  Confused kids only cling to their bad mum harder, trying hard to appease her, assuage her and fulfill her insatiable needs.  Relatedly…

She’s out of her damn mind, but has a talent for making you feel crazy.  If you make allegations of abuse, the bad mum responds by saying you’ve always had an overactive imagination.  Try to hold her accountable for anything, and she’ll try to make you doubt your memory, calling you a liar to your face (and to anyone else who is willing to listen).  This kind of parenting is akin to throwing a kid in a shark tank, mocking him for feeling terrified, and then saying his own weak character is the reason his heart is pounding double time.

She’s possessive and envious.  She can be counted on to sulk, create conflict or hog the limelight anytime you get public recognition.  Receive a lot of applause at your graduation?  She’ll bemoan the way you wore your hair and harp on the way you fumbled with your diploma.  Someone praises you at your fourth birthday party? She’ll sulk or choose that precise uent to argue with the party magician.  But the envious behaviour she exhibits when you do well pales in comparison to the jealousy your friendships and romances cause her.  If you’re adult and single, she’ll disparage your love interests.  If you’re married, she’ll torture your husband.  If you make the mistake of introducing her to your friends, she’ll speak poorly of you to them and visa versa, which leads me to the next weapon in the bad mum’s arsenal…

She controls information and pits her loved ones against each other.  The personality disordered mum loves to be in charge of the family switchboard – a communication style psychologists call “triangulation.”  She gossips, starting “he said/she said” dramas with the skill of a teenaged mean girl.  The goal is to erode family relations so badly people stop talking to one another, at which point no one will be in a position to compare notes or catch her in a lie.

She treats her children like extensions of herself, demonizes some and playing favourites with others.  It’s called “splitting,” and the personality disordered mum does it by heaping her grandiose fantasies onto one golden child and turning another child into a family scapegoat –someone she can accuse of the antisocial attitude that resides, secretly, within herself.  Her children learn to play their assigned parts in order to survive.  Achievement becomes everything to the golden child, who might strive to be a musical prodigy, an honors student, a reality TV star, a child pageant queen – whatever it takes to win his mother the attention, admiration and the bragging rights she craves.  And the scapegoat obediently develops a bad self-image, sometimes developing addictions and trying out criminal behavior, all because the personality disordered mother convinced him he was bad.

She treats her kids in age-inappropriate ways.  Sometimes she treats small children like peers, divulging icky information about her work troubles or her romantic life over animal crackers the same way a healthier woman would confide in a friend over cocktails on a Friday night.  On the flip side, she might also have a tendency to infantilize older and even adult children, cutting their food, calling them “little man” or “little girl,” lording inheritance over them, or otherwise invalidating their independence.

She can’t help it.  Hers is mindless evil.  She does it because she’s blind to the present.  A therapist once described the personality disordered mother to me like this: “Some of the things she does seem very sadistic.  But she’s not actually thinking about harming you.  She’s not actually thinking anything at all.”  In her cruelest moments, the bad mum’s brain is like static station on the TV.  Whatever the trigger, she’s psychologically and emotionally gone offline.  Even though she’s not aware of it, she’s reliving and reenacting the worst traumas of her life – using the people closest to her to tell a story of life experiences her glitched brain can’t process any other way.