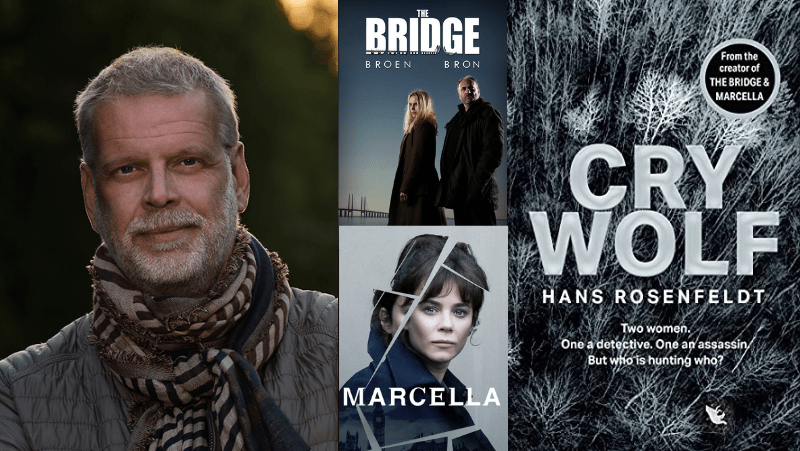 A Letter from Hans Rosenfeldt

Hannah Wester, a detective in the remote northern Swedish town of Haparanda, finds herself on the precipice of chaos.

When human remains are found in the stomach of a dead wolf, Hannah knows that this summer won’t be like any other. The remains are soon linked to a bloody drug deal that went down just across the border in Finland. But how did the victim end up in the woods outside Haparanda? And where have the drugs and money gone?

Or at least the first one I got paid for.

I continued to write and create TV-series for almost 20 years before I wrote my first book. And in all honesty, that was a pilot to a show that was rejected by the broadcaster in question because they weren’t looking for original ideas when it came to crime shows, they were only interested in thrillers adapted from books. So, me and my colleague Michael Hjorth, who co-wrote the episode with me, decided to turn our pilot episode into a book instead.

How hard could it be?

As it turned out, pretty hard.

The most noticeable difference we found, was the number of words. A book contains so many words. It sounds ridiculous when you say it like this, I know, but the difference between how many words there are in a book compared to a script was… overwhelming.

A script is really just the blueprint, the foundation. You write the dialogue and more or less detailed stage directions and that’s it. Then an entire workforce comes in and builds the final product from your blueprint. Directors, actors, cinematographers, set- and costume designers, all chip in and help to visually tell your story. In a book, you’re on your own. What a person is thinking, feeling, how they look and dress, what the world around them is like and how it works, how it smells, what it feels like, all of that is up to you to describe, which you rarely, or never, would do in a script. And it takes a lot of words to do so…

Given that the script is only the blueprint, it’s understandable that many more people will give you notes and have opinions about your work compared to a book, which is the finished product. On TV, everyone that I mentioned earlier, plus producers, executive producers, broadcasters, and financiers, have opinions that they will present to you in a brutally straightforward manner. In the book world it’s just your publisher and editor, who, at least in my experience, have far more respect for the text and your writing.

But a lot of the actual work of writing a book is very similar to how I write for TV. The process from first idea to finished product isn’t that different. It’s about telling a compelling story with interesting characters in the best possible way. Since my background is in TV, where a lot of people are involved in the writing process and everyone needs to know where the story is going and how to get there, I usually make a detailed storyline even for my books. I put the whole book, chapter by chapter, plot and character development, up on my wall with post-it notes before I type a single word. I can of course come up with new ideas whilst writing, but the main structure stays intact, and I always know where I’m going with the story. If it’s a crime story – and so far, it always has been – I know who has done it and why, and that never changes.

Another difference between books and scripts is restrictions. There are none when writing a book. You can travel across the world, destroy whatever you want, have epic fight scenes, take a trip to space, only your imagination sets the limits. That is not the case when writing for television. Sooner or later in the writing process there will be a budget perspective. To write a helicopter crash on a bridge in a book is just an action-packed sequence. To write the same crash in a TV-series is asking for many lengthy meetings about how to do it, if it’s really necessary, what other costs can be cut, if you can replace it with something else or scale it down, only to finally have it deleted from the script.

I never contemplate how a reader or viewer will react to what I’m writing. I write what I want to write, tell the story I want to tell in the best way I can think of telling it. Since I have a detailed storyline when I start writing, I play every chapter or scene in my head as a little film and just write what I see. If it’s a book I will add descriptions of the environment, internal monologues and the thoughts and feelings of the characters, when and if it’s needed.

If I find a story good, exciting and engaging, then I hope and think that others will too. And so far, touch wood, that has fortunately been the case…